John Lewis Cardiff is holding an exhibition featuring photographs from Rubicon sessions in ‘The Place to Eat’ on the 3rd floor.  The exhibition will run for 3 months and is open to the general public. 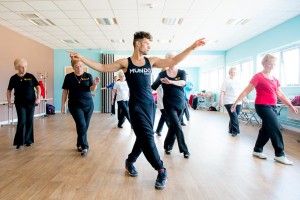 Rubicon is showcasing a project funded by Gwanwyn last May. Three separate workshops brought together Rubicon’s Cardiff based Llanrumney 60+ dance group and Newport based Nuwave group in three separate venues across the two Cities. The dancers by worked with a new guest teacher and were introduced to a brand new style which incorporated a fusion of Latin Styles.  The ladies involved benefited from dance sessions which were beneficial to their physical, mental and social well-being.  They forged new connections and friendships whilst challenging themselves with a new style of dance. 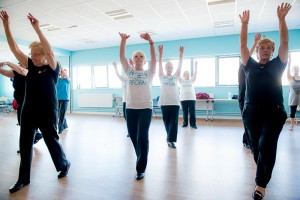 Professional photographer Sian Trenberth documented the workshops in order to provide images of positive role models for older people enjoying physical and creative dance.  Her images of the Llanrumney Ladies and Nuwave groups in John Lewis represent Rubicon and Gwanwyn in celebrating creativity and dance activities for older people.